November 13, 2018
In this blog post I will detail how to perform various incident response techniques using native Windows PowerShell functionality. Each method I explain will be able to be executed remotely to allow for efficient investigation and containment of an individual host. For PowerShell response on mass, I recommend familiarising yourself with the Kansa framework.

If you follow my github, you may also notice that many of the techniques listed below are built into my remote powershell triage tool, B2Response, which allows you to perform these actions with ease. Please give it a go and provide feedback!

The techniques which I will cover include:
1) Issuing remote command/shell
2) Retrieving/downloading files
3) Checking for running processes
4) Query registry keys
5) PCAP collection
6) Blocking a domain
7) Blocking an IP
8) Quarantining a host

All of the techniques listed below utilise PowerShell to remotely manage computers within your IT environment. In order for these techniques to work, you must have your environment configured to permit PowerShell remoting and you must be running the commands from a user who has privileges to execute remote PowerShell commands. For more information on how to set this up, please read this article.

Throughout this blog post, I will be describing how to execute various PowerShell remoting commands. Whilst it is possible to issue these commands individually, I prefer to establish a PowerShell session first, and then refer to this session in subsequent commands.

The reason I prefer to establish a session first is that I use the -NoMachineProfile session option, which restricts creation of a user profile on the remote host. By establishing this session once and then referring to that session for each subsequent command, it reduces the chance that I will forget to include this session option and expose myself on the target machine.

What would I need to prevent profile creation on the remote host?

Preventing creating of your user profile on the remote host will save you lots of potential headache when investigating alerts in a corporate environment. Imagine that you have to investigate your senior executes for suspicious activity. If that senior executive then sees your user profile on his PC, he may think you were snooping on his computer. Save yourself the hassle and setup your session with stealth!


We can now refer to the $s1 variable for subsequent commands and they will be executed through this session.

When researching security products, I found it quite surprising that very few products supported remote command execution on the host. When I asked vendors about it, most vendors stated that it was coming very soon on their feature road map, as it was a highly requested feature.

PowerShell Prompt
To access the PowerShell session and enter manual commands on the remote host, enter the following command.

Individual PowerShell Command
To execute a single PowerShell command (or command block) on a remote host, enter the following command.

PowerShell Script Execution
To execute a PowerShell script on a remote host, enter the following command.

Sometimes we may want to download a file from a remote host to our local machine in order to perform further analysis. To download a file, execute the following command:


In this command we are copying the file "C:\Users\bob\Downloads\maliciousdoc.docx' on the remote host to our local D:\triagefiles folder.

A limitation to this method is that you will not able able to download files which are protected (such as registry hives). In order to download these files, you will need to use a third party tool such as RawCopy, which can be remotely executed with ease using B2Response.

To check running processes, we can remotely execute Get-Process using the following command. 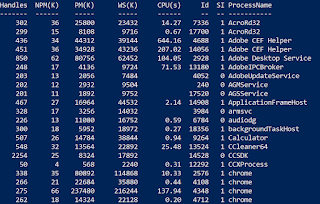 Querying registry keys can be a useful way to identify the presence of malware on a system. One common registry key I will use as an example is the HKLM\Software\Microsoft\Windows\CurrentVersion\Run key.

This registry key contains a list of programs and their arguments which get executed every time Windows boots. As a result, many malware will add an entry to this registry key so that the malware runs on each boot.

To view the contents of this registry key on our remote host, use the following command

This is useful if you know which  key you need to look in, however there are many other registry keys malware may use to persist on a system. As a good starting point, I would recommend running autorunsc to check multiple locations. B2Response can execute this tool remotely using PowerShell with ease.

Thanks to some fantastic work by nospaceships, it is incredibly easy to capture network traffic into a wireshark compatible PCAP file with PowerShell. This capture method works by using raw sockets to capture IP packets on a specified network interface.


What are raw sockets?


In this example, we will be capturing on the wireless interface, which was listed in the output of the ipconfig command.

Stage 2) Run the pcap script
The following script will download nospaceships raw-socket-sniffer script, execute it and save the pcap to 'capture.pcap' in the current working directory of the remote host.

Ensure that you replace the -InterfaceIP parameter with the IP address identified in stage 1, or your pcap may be empty.


Because we ran the session with the -NoMachineProfile option, the raw-socket-sniffer.ps1 and capture.cap should be located under C:\Windows\System32. 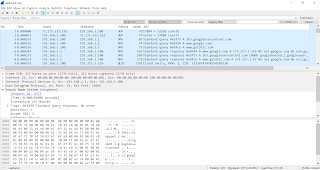 In this example we will be redirecting malicious traffic destined for http://bad.com/ to the localhost, which effectively blocks network connections to this domain. To do this we will edit the Windows hosts file.

What is the Windows hosts file?

The Windows hosts file is located at C:\Windows\System32\drivers\etc\hosts on Win 7+ and Server 2003+ systems and contains mappings of IP addresses to host names. We can use this to redirect traffic destined for a specific domain to a specific IP address. The file has no extension, but is a normal text file that can be edited with notepad.

Localhost is a networking term which refers to the current computer. In this scenario, we will be redirecting malicious traffic to localhost, where it will fail to be received, as there is no service listening for the traffic (unless you are running a web server).

Shouldn't we be blocking/sinkholing on the network layer?

Absolutely. Automated domain sinkholing at a network layer is a fantastic control. There are however many scenarios where network sinkholing may not reach all devices in your environment. I've seen many environments where remote devices aren't configured for full tunnel back to on premise firewalls, so the host goes straight out to the internet (bypassing a firewall sinkhole).

So let's open C:\Windows\System32\drivers\etc\hosts in your favourite text editor (I will use Notepad++) as Administrator and append the following line: 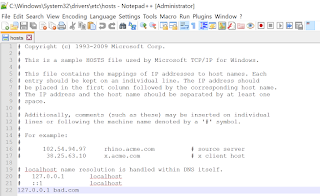 Now when we visit bad.com in a browser we cannot reach this location, because traffic is being redirected to the localhost, which isn't hosting a web server. 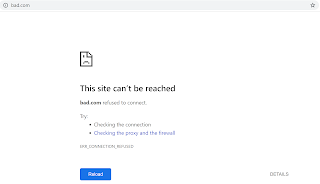 Lets automate this with PowerShell. Copy the following code into Notepad++ and save it as blockdomains.ps1

Note: The `n adds a new line to the file.

Once this script is executed on a host, it will perform the same modification that we manually made to the hosts file. To block multiple domains, simply add additional Add-Content commands to the blockdomains.ps1.

To execute this script on our remote PC, use the script execution command we learnt earlier:

The reasons unknown to me, the Windows firewall is often overlooked as an effective host based firewall.


What is a host based firewall?

A host based firewall is a software firewall that runs on an individual computer which defines what inbound and outbound network connections are allowed to/from that computer.

In order to block connections to a specific IP address (173.182.192.43 in this example) on a remote host, use the following command:

To unblock this IP address, run the following command:


What does it mean to quarantine a PC, and why would we do it?

Quarantining a PC is the act of segregating the device at a network level, as to limit the capability for the compromised of that device to spread to, or access, other computing resources within the IT environment.

We can use the following PowerShell command to create a new Windows firewall rule called 'InfoSec_Quarantine' on a remote PC which we would like to quarantine.

Once applied, this computer will not be able to initiate any outbound connections to either internal or external (including internet) resources. Don't be surprised if you don't receive feedback from this command, or further commands, as the PC cannot send traffic outbound anymore!

If you would like to roll back this quarantine action, you can simply issue this command to the same device to remove the quarantine firewall rule. This should work, as the host can still receive inbound connections and process the command.

Popular posts from this blog

By Barnaby Skeggs Preamble Since the release of Windows 8, and the ‘Metro’ interface, touch screen input has been implemented in a rapidly rising number of Windows devices including Microsoft Surface Pro/Book, 2-in-1s, convertible laptops and tablets. Microsoft has catered for this trend, implementing conversion between touch/pen handwriting to computer text in software such as OneNote. In this paper I will detail my research into the forensic artefact ‘Waitlist.dat’, which I believe to be associated with this functionality. I identified the ‘WaitList.dat’ artefact while investigating a Windows 8.1 PC for the presence of a known email. I was provided with a copy of this email, and part of the investigation involved identifying whether or not this email ever existed on the custodian’s computer. After processing the .PST and .OST mailbox archives on the PC, I did not identify the existence of the email. I then processed shadow copies, carved and processed for various mailbox stores
Read more

April 16, 2021
When analysing a system for evidence of attacker activity, the presence of a file named LSASS.DMP should pique your interest as an investigator, as it can be an indication of credential theft and possible privilege escalation. However, if there is no other evidence of compromise on the system, or the creation timestamp of LSASS.DMP is outside of your intrusion timeline, you may be left questioning whether the dump relates to this breach, a historical breach, a red team or no breach at all. In this blog I will share an analysis technique which recently helped me ascertain with high confidence that an LSASS.DMP file was generated by an administrator and was not related to the intrusion we were investigating. What is LSASS.DMP? The Local Security Authority Subsystem Service (LSASS) is a process in Microsoft Windows operating systems that is responsible for enforcing the security policy on the system, such as verifying users during users logons and password changes.  LSASS.DMP is a dump fi
Read more